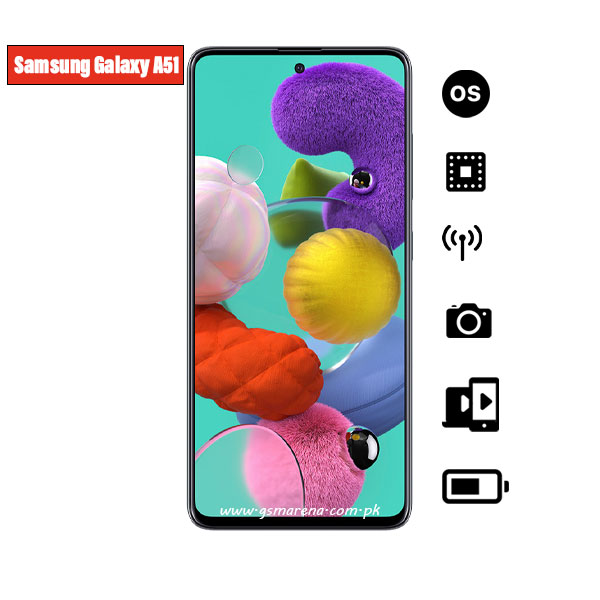 Samsung Galaxy A51 price in Pakistan

Samsung Galaxy A51 – Another Series By The Company

Samsung is coming with its Galaxy A51, the new smartphone of the A-series. Recently, the company announced the A50s, the high-end version of A50. Now they are planning to come up with Samsung Galaxy A51. Well, the leaked specs show that the handset is a good one and will make its value once it launches. The smartphone is packed with the latest chipset that is called Exynos 9611. So, the new model, Samsung’s Galaxy A51, is packed with the enhanced edition of the existing Exynos 9611 chipset. So more power can be expected from the new handset. The chipset of the coming phone is paired with 6 gigabytes of RAM. The new Samsung Galaxy A51 will be packed with 128 gigabytes of internal storage. The storage of this capacity is very common these days. The reason is that Mobile phone companies must be packed their smartphones with qualitative specs to stay in the market.
The coming Galaxy A51 by Samsung will be available in two variants, The storage capacity of the first one is mentioned above, and the other variant will be packed with 128 gigabytes of internal storage. Samsung A51 has got an expendable storage option to hold more data. The phone is expected to come equipped with a quad-camera setup. The primary sensor of the Samsung Galaxy’s A51 is 48 megapixels along with the 12-megapixel wide-angle lens, a 5-megapixel depth sensor with f/2.4 aperture, and a 5-megapixel macro sensor. The new Samsung Galaxy A51 is coming with The Android 9.0 OS out-of-the-box. The handset is fueled with a 4000 mAh battery. Like its 50 variant, the upcoming Galaxy A51’s will be embedded with an under-display fingerprint reader to secure the data on the phone.

The overall rating is based on 1 reviews by users.

7.4
Post a Review Please not that each user review reflects the opinion of it's respectful author.