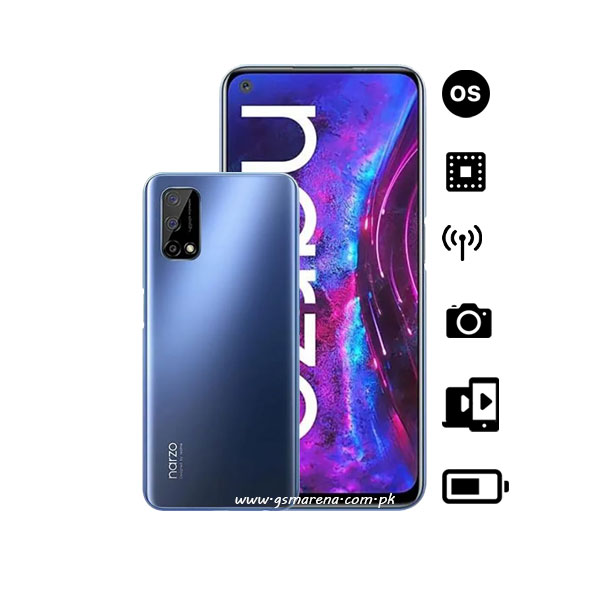 Realme will unveil its new Realme Narzo 30 Mobile soon to the market. The launch date for the coming smartphone has yet to be announced, but the handset is already seen on multiple websites. The call might start soon. A live photo of Realme Narzo 30 leaked after being posted on the Indonesian Telecommunication Certification website and the FCC. The handset will be powered by the Mediatek Helio G95 (12 nm) chipset. The chipset suggests that Realme’s Narzo 30 be a mid-range handset with outstanding features.

Smartphone has got a processor of 2.50 GHz Octa-Core, which will give this device more power. And there is a GPU of Mali-G76 MC2 under the hood of this smartphone. Also, there is screen protection of Corning Gorilla Glass 3. The upcoming new Realme Narzo 30 will have an IPS LCD Capacitive Touchscreen display with a size of 6.5 inches and a resolution of 720 x 1600 Pixels, which means that the coming up Narzo 30 by Realme got a big screen display for the users to enjoy it. The handset has 6 gigabytes of RAM that will make it easy to execute tasks with high speed. This means the users will be happy to have this device. The Realme 30 got 128 gigabytes of internal memory storage, which is enough to store a considerable amount of data. And it can be expanded as the phone has a microSD card.

There is a Triple rear Camera setup in Realme Narzo’s 30, The primary sensor of the rear camera setup will be 48 megapixels, 8 megapixels, and a 2 megapixels sensor. The handset is expected to come equipped with a 16 megapixels selfie shooter. The insecurity of user’s data, the Realme Narzo 30 got a rear-mounted Fingerprint Sensor, a regular feature nowadays on smartphones. The battery of this device is 5,000 mAh to give full-day use to the users, and also, there is a fast-charging 30W.